On January 28, the federal government gave the green light for three Covid-19 vaccines including Russia’s Sputnik-V, China’s Sinopharm and UK’s Oxford-AstraZeneca for emergency use in the country for which a step-by-step guide was also issued. The National Command and Operation Centre (NCOC) has made the arrangements for the vaccine’s storage in Islamabad and has also taken measures to air-transport it to the federating units, especially Sindh and Balochistan.

Federal Minister Asad Umar, giving an update of the flight, said the aircraft was currently in Beijing and was being loaded with half a million doses of the vaccine and would depart for Pakistan in a few hours. Meanwhile, a vaccine nerve centre has also been established at the NCOC, taking onboard the provincial and district vaccine staff and authorities, coordination centres, and adult vaccination centres.

In addition to the 500,000 doses of Sinopharm, Pakistan secured 17 million indicative doses of the AstraZeneca vaccine on Saturday, out of which 35-40 per cent or 6 to 6.8 million doses will be available within the first quarter of the current year. According to the current statistics, Corona cases in the country stand at 544,813, while the deaths due to the virus are at 11,657. The recoveries from the infection so far stand at 499,974. 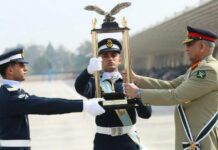