In an interview with the Financial Times, Pakistan’s Prime Minister Shahid Khaqan Abbasi noted that the Pakistan Air Force (PAF) had alternate
options to the U.S. for fighter aircraft. Abbasi specifically praised Pakistan’s collaboration with China, with whom it is co-producing the JF-17
Thunder multi-role fighter.

In 2016, the PAF had intended to acquire eight Lockheed Martin F-16C/D Block-52 from the U.S. The White House had agreed to partly subsidize
the $700 million U.S. sale through the Foreign Military Financing (FMF) program. However, Congress put a block on the FMF component, and
following that, the Defence Department had withheld $300 million in Coalition Support Funds (CSF). The U.S. blocked the funding on account of
being unconvinced of Pakistan’s commitment to fight the so-called Haqqani-network. The U.S. alleged that the group was operating from within
Pakistan’s territory.

Consequently, Pakistan walked away from the deal (albeit after calls to Washington for reconsideration). However, the claim of having ‘other
options’ had been made in 2016 as well. In May 2016, Sartaj Aziz, then foreign advisor to former Prime Minister Nawaz Sharif, told the Financial
Times that Pakistan would “opt for jets from some other place”, with reference to China or Russia. In June 2016, the Pakistani Senate’s Standing
Committee on Defence echoed the policy by calling the PAF to pursue other sources.

Although there have been news reports of Pakistan expressing interest in other platforms, most notably the Su-35, the PAF had officially
maintained that it was seeking additional F-16s. Its rationale centered on the fact that the PAF was already operating the platform, thus possessing
the infrastructure to readily add new aircraft. The first official mention of an alternative off-the-shelf fighter came in April 2017, when the Chief of
Air Staff (CAS) Air Chief Marshal (ACM) Sohail Aman told Bol Narratives, “Pakistan definitely has to induct new aircraft. We have both Chinese and
Russian options.”

For several decades, the F-16 – both the original Block-15 and the later Block-52 and accompanying Mid-Life Update (MLU – was the PAF’s
principal qualitative driver. The induction of the Block-52+ and MLU, the PAF was equipped with a platform integrated with modern subsystems, a
tactical data-link (TDL) in the Link-16 and contemporary weapon-systems, such as the AIM-120-C5 beyond-visual range air-to-air missile
(BVRAAM). Through the late 2000s and early 2010s, the F-16 provided the bulk of contemporary air defence and surface-strike capabilities to the
PAF.

However, in its efforts to supplant 190 legacy fighters, the F-16 was only a part of the PAF’s modernization efforts. The JF-17 Thunder, which is
co-produced by Pakistan Aeronautical Complex (PAC) and the Aviation Industry Corporation of China (AVIC), would assume most of that burden.
While the JF-17 does not have the F-16’s range or payload, the PAF has been succeeding in imbuing the JF-17 with analogous capabilities, such as
the SD-10 BVRAAM, Link-17 TDL and ASELPOD targeting pod. Free of the supply-side restrictions attached to the F-16, the PAF has also equipped
the JF-17 with stand-off range strike capabilities, evident in the integration of the C-802 anti-ship missile (AShM) and Range Extension Kit (REK)
glide-bomb system.

There are variances in performance, but the JF-17 provides the PAF with a secure and fully manipulatable platform solution, one that brings
comparable value to the F-16. Whereas the upgrade path of the PAF’s F-16s is unclear, the JF-17 Block-III – which will have an active
electronically-scanned array (AESA) radar – is on-track, with the PAF CAS projecting that it will enter production from 2020. Unlike the F-16, the
cost and obstacles of fitting the JF-17 with emerging subsystems and munitions, especially air-launched cruise missiles (ALCM), are substantially
lower. For the PAF, the value the JF-17 brings is only increasing, whereas the F-16, while valuable, has been capped as a consequence of geo-
political realities.

The PAF views the JF-17 as an integral baseline, one that is forming the backbone of the fighter fleet and, when necessary, assume the bulk of
operational duties in tension and conflict. In his interview with Bol Narratives, the PAF CAS stated the following about the JF-17 fleet: “We cannot
call it parity, but we have a core structure, which doesn’t prevent us from launching an air campaign,” adding, “Pakistan definitely has to induct new
aircraft.” For fulfilling its baseline requirements, the JF-17 is sufficient, but the PAF has a need for an off-the-shelf fighter to provide additional
capabilities – i.e. range and payload.

For the PAF, a platform such as the Su-35 would provide demonstrable long-range coverage essential for deep-strike, offensive air operations and
maritime operations (beyond Pakistan’s littoral waters). The PAF will not be able to procure the numbers necessary to fundamentally alter its parity
with India, but a limited number of medium-to-heavyweight platforms can provide it with substantive offensive capabilities that might add to
Pakistan’s conventional deterrence posture.

For example, a large platform can provide air cover reach to the heart of Pakistan’s exclusive economic zone (EEZ). If equipped with a long-range
AESA radar as well as longer-range BVRAAMs, such a fighter may help expand Pakistan’s anti-access and area denial (A2/AD) envelope in the
maritime environment. With greater payload capacity and range than the JF-17, said fighter could also ferry a heavier ordnance load – this would
be valuable for multiple long-range ALCM, AShM, anti-radiation missiles (ARM) and SOWs with heavy (600+ kg) or submunition warheads. The PAF
would have to guarantee that these fighter units are on standby in a period of escalating tension to join quick strike campaigns with the Army and
Navy.

However, the PAF (with Pakistan as a whole) is constrained by the reality of limited fiscal means. This is not to say that Pakistan is incapable of
affording new fighter assets, but arms acquisitions do not operate in a vacuum. Pakistan is still barred from accessing technology that can be
construed (however limited in scope) as strategic, which could be against the overarching security interests of the U.S. On the other hand, willing
sellers could eschew selling to Pakistan in order to strengthen their commercial position in India (or India could simply leverage larger carrots, the
impact remains the same).

Ultimately, it is unlikely that Pakistan will risk pursuing the PAF’s requirements through open commercial avenues. Outside of China, Islamabad
would likely work to secure a purchase under an intergovernmental agreement (IGA), one that directly addresses regulatory and supplier-side
restrictions prior to contractual negotiations. However, this is contingent upon a government that is serious about undertaking the foreign
relations work to bring the prospect of an IGA to the table. Only the results (or lack thereof) will attest to the success of the Government of
Pakistan’s efforts in this regard.

Regarding options, the PAF has not mentioned any specific platforms. However, the CAS had mentioned options in China, Russia and, for a time
(i.e. in 2015), the West. While broad strokes, the general benefits and challenges with each source will affect each of their respective platforms.
For the PAF, China remains its likeliest and most accessible source for a sophisticated solution. AVIC has listed the FC-20 (J-10A) and FC-31 on its
export catalogue, though the latter is currently under development.

Some might suggest Shenyang-built Flanker variants, such as the J-11, J-15 or J-16, but these are not listed on AVIC’s export catalogue either.
Moreover, China will likely be in a sensitive position in regards to its relations with Russia. It is unlikely that Shenyang Flankers will be sold without
approval from Moscow, which might prefer benefitting from the manufacturing work involved for such an order itself.

The PAF does not have any experience dealing with Russia as a big-ticket fighter supplier. Even if Moscow is willing to sell aircraft, Pakistan would
have to ensure that the support and maintenance package it needs to operate Sukhoi or Mikoyan jets is in alignment with its operational
requirements. It cannot afford dips in operational availability due to delayed availability of spare parts. Moreover, India is a deeply engaged client
in Russia, with multiple ongoing and prospective multi-billion-dollar aircraft and armour programs.

The challenge with Western Europe is two-fold: first, securing actual access to modern equipment and technology and second, financing the
acquisition of those systems. However, for the PAF specifically an off-the-shelf Western fighter has several advantages in terms of recycling
existing PAF assets.

First, a Western European fighter can be equipped with the Link-16 TDL protocol, which could enable it to operate in concert with the PAF’s 76 F-
16s in a seamless and integrated fashion. Second, by being able to operate closely with the F-16s, it is possible that the PAF could make due with
fewer of these additional fighters. For operations, the F-16s can accompany these fighters, whereas it is possible – if not likely – that a larger
number of new Chinese or Russian platforms would be necessary to replicate a similar impact.

Unfortunately, the Western path, much like the path of additional F-16s (and seemingly, used F-16s) is an inaccessible path for the PAF. Even if an
aircraft could be acquired, the technical possibilities of melding with the F-16 does not mean that the U.S. will permit it. Finally, the PAF CAS’
statements point East.

It remains to be seen if the PAF will be able to acquire an off-the-shelf platform, but the need for one has begun to surface in official discourse,
albeit with no mention of specific platforms (additional F-16s notwithstanding). This issue – while currently essential – is a fleeting bridge for the
PAF, which is staging its long-term on Project Azm, which envisages the development and production of an original 5th-generation fighter in
Pakistan. 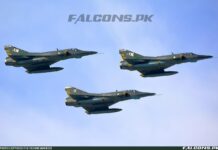