Pakistan Air Chief Marshal Zaheer Ahmed Baber Sidhu also attended the Bahrain Air Show which is considered one of the most prestigious aviation events. During his interaction with the Pakistan Air Force contingent, the Pakistan air chief lauded PAF personnel’s performance in the airshow and praised the PAF team for putting up a remarkable show at the mega event. PAF’s participation in the event “was a matter of pride for the nation” the PAF chief said.

“The indigenously manufactured JF-17 fighter jet remained the star attraction of the show,” the PAF said in its statement. The participation of JF-17 Thunder aircraft in the airshow “proved to be an excellent opportunity to showcase the aircraft’s cutting edge capabilities.”

The display also allowed potential buyers to evaluate the fighter jet’s immense potential in the international market. Myanmar and Nigeria were among the first foreign customer of the JF-17 aircraft.

At the event, PAF personnel also briefed the visitors about the combat aircraft’s operational capabilities and sophisticated weapons. The jets had a static display as well as an aerobatics performance that delighted the spectators. The aerial demonstration and display allowed visitors from around the world a firsthand look at the multirole aircraft.

JF-17 Thunder is a single-engine, lightweight, multirole combat aircraft, jointly developed by Pakistan and China. In early 2022, Pakistan announced the rollout of JF-17 Thunder Block III fighter jets built at Pakistan Aeronautical Complex (PAC) Kamra, which will become the backbone of the PAF fleet. The Block III variant of JF-17 will be the country’s first 4.5-generation aircraft and the most advanced jet equipped with Airborne Electronically Scanned Array (AESA) radar, upgraded sensors, software, and engine to adapt to rapidly evolving technologies. Block III will significantly improve the aircraft’s performance and allow it to carry additional weapons including smart munitions.

At the airshow, the PAF chief met several high-ranking officials and visited representatives of major defence, space, and aviation companies at the Bahrain Airshow 2022. Pakistan Air Force’s participation aimed to promote locally-built aircraft and build on relationships with global industry leaders. The event hosted over 100 high-level delegations representing top civilian and military corporations from across the world.

The three-day event saw stunning flying displays by the world-famous UK’s Red Arrows among others. 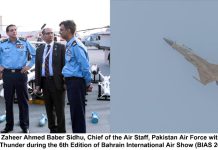