Earlier, on his arrival, the CJCSC was received by Air Chief Marshal Mujahid Anwar Khan, Chief of the Air Staff, Pakistan Air Force. A smartly turned out contingent of Pakistan Air Force presented him the Guard of Honour. He also laid floral wreath at the Martyrs’ Monument to pay homage to the Martyrs’ of PAF. 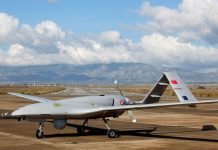